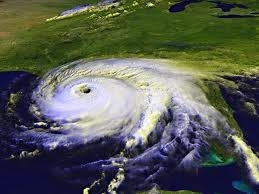 The first day of June. A day that strikes fear into the hearts of the Florida native. (Yes, there are actually people who were born in Florida. And what’s more, we have Southern accents. Don’t get me started on that.)

You see, June 1 marks the beginning of hurricane season. Now, I have to say that Florida was fortunate in its assignment of natural disasters — hurricanes are pretty much limited to a finite season in the summer and fall, we have days and days of warning before they strike, and they move slowly enough that anyone who wants to run will have plenty of time to get out of the storm’s way. I couldn’t cope with California’s earthquakes — suddenly, without warning, the earth moves? Please. People shouldn’t have to live that way.

So aside from being the most beautiful section of the country, the Emerald Coast of Florida is blessed with a fairly manageable threat of natural disasters. But part of managing that threat is the reality that, as every June begins, we turn our thoughts toward storm prep. Because, really, if you wait until you see Jim Cantore broadcasting from the deck of your favorite seafood restaurant, it’s too late. You have to make your plans, lay in your supplies, and start praying well before a storm gets into the Gulf.

My grandmother was a wonder when it came to storm prep. She didn’t pay a bit of attention when storms started forming off the coast of Africa. But as soon as one got near the coast of Puerto Rico, she started checking her supplies. When the storm made it into the Caribbean, she’d pull out the flashlights and candles. And by the time one got into the Gulf of Mexico, Grandma Holley would be cooking up every bit of frozen or refrigerated food in the house.

Remember, any decent sized storm hitting the Central Gulf Coast will probably turn off the electricity for at least several hours, if not days. And for my frugal grandmother, the thought of throwing out food was anathema. For many years, my cousins and I thought that hurricanes were holidays, kind of like Thanksgiving or Christmas. We’d all gather up at Grandma’s house, stay up all night playing games by candlelight, and there would be enough food to feed a battalion.

Another thing Grandma did for hurricane prep was kind of bizarre — at the time, I just took it as what one did, but now I’m darned if I understand it. As a storm closed in on the Gulf Coast, Grandma would get one of her children (my mom or her brothers) to run to Winn-Dixie for supplies. There would, of course, be lots of canned goods and non-perishables, but without fail, Grandma would instruct them to invest heavily in two items that, she was convinced, would ensure our survival: light bread and Clorox.

“Light” bread, for the unlightened non-Southerners out there, is also called loaf bread. It’s what you Yankees most likely just call “bread” — the fluffy, sliced stuff that comes in wrappers from a commercial bakery. It’s not white bread, though. The word “light” refers to the texture/weight of the bread, and means that it was made with yeast. You can have white or whole-wheat light bread. Don’t know why we had to have several loaves on hand for a hurricane, but it was a rule Grandma stood by.

Clorox, of course, you know about, and grandmother, thrifty as she was, would accept no store-brand, generic substitute. There were two great name brands she lived by: Crisco shortening and Clorox Bleach. I’m not sure exactly what the Clorox had to do with hurricane prep, but she would never face a storm with less than three large bottles of bleach on hand.

Looking back, I don’t ever remember her opening the Clorox and using it, but then again, my cousins and I were so busy stuffing our faces that we didn’t pay attention. Only thing I can guess is that she used it for water purification. You see, out in the country, each family had its own water pump — no citified water utilities for us! So, with the pumps electric-powered, a hurricane meant no water. So while Momma or one of the Uncles went to pick up the light bread and Clorox, Grandma would have me and the cousins running madly from house to house, filling up every bathtub and available bucket with water. I guess Clorox would kill any nasty bugs lurking in the water after it sat around the house in the hot, humid un-air-conditioned days following a hurricane.
Truly, you haven’t lived until you’ve had to flush the john by scooping a cupful of water out of a bathtub in the dark.

I have a hurricane in my current WIP, so I guess there would be an upside to riding out a storm this year — veracity, and all that. But having been six weeks without power after Hurricane Ivan, I’d rather write that scene from distant memory!

But just to be careful, today, June 1, I will be stopping at the grocery — though being a yuppified child of the New South, it will be Fresh Market, not Winn-Dixie — to grab some bleach and bread. Happy Hurricane Season, y’all!