Today I’m participating in the “Where’s The Love” blog hop, sponsored by my friend, the Fearless Leader of my crit group (I love you, SFWG!), Ms. Heather Webb.

Ms. Heather’s fabulous book, Becoming Josephine, will be published by Plume/Penguin in early 2014. And since it tells the story of how a young Josephine captured Napoleon’s heart, the girl knows her love scenes!!!

Y’all hop on over to Heather’s website, join in the Celebration of Love, and have a happy Valentine’s Day!!!

In my WIP, Hook, Line, and Sinker, Emory is a city girl who unexpectedly ends up at a fish camp near the Florida-Georgia border. Against her will, she finds herself attracted to Gary, a hunting and fishing country boy with the heart of a Southern gentleman. In this scene, Gary has taken Emory out into the woods on his family’s property to see his special place, a magical, ancient oak tree.

As soon as he had spread the blanket out, he turned and lifted me down from my perch on the branch. “I want you. Right here. Right now. Out in the open, nothing hidden.”

We sank together to the ground, under the magical fairy oak.

“What do you want, Emory?” He murmured between deep, soul-baring kisses. “Tell me what you want.”

“Where? How?” His lips burned a trail across my skin. “Tell me what you want.”

I had done a lot of things in my life, but I had never made love out in the open air, with nothing but the branches of a tree for shelter. It was sweet and intimate and yet brazenly exposed.

Gary rose up over me, his face taut with concentration and — what? Love? Of course not. But as he looked down at me, his eyes somehow fierce and tender at the same time, I realized that I had done exactly what I had intended not to do. I had opened my heart to someone. To this funny, sincere, very real man. And I didn’t know how I was going to deal with that.

If you are going to try to make a go of this bizarre hobby/profession/pursuit/obsession calling writing fiction, ya gotta have friends. I don’t mean the “hi, how are you, we should do lunch, call me” kind of friends. I’m talking about people who you can tell about your latest writing funk, confident that they will simultaneously hand you a sympathetic chocolate cupcake and give you the proverbial swift kick in the gluteus that will jump start your muse.

I’m particularly blessed in this area, because I have two groups of friends who fit this description. In realtime, I have the greatest bunch of writers to hang with at the local Books A Million. So a great big shout-out to the Pensacola clique – you know too much about me for us to ever stop being friends!

And in the virtual realm, I am proud – and humbled – to be a part of an incredibly talented and supportive crit group known as the Super Fly Writing Group! (Aka #SFWG on twitter).

They encourage me, challenge me, and inspire me on a daily basis. And the very fact that they let me play in their sandbox gives me hope. I mean, seriously – if these brilliant ladies treat me as a colleague, I must have some tiny bit of talent there somewhere!

Last week, the awesome Candie Leigh, a fellow SFWG member and helluva YA author, sent out a blog challenge called The Lucky Seven. Now, at the time, I was in the midst of a trip to Orlando’s theme parks with my babies, and I didn’t get to play then. But the challenge reminded me that I had been inexcusably lax in my blogging, so now that I am back in the real world, I am picking up on Candie’s meme and running with it. You should all go right now to read her Lucky 7 post at http://adventuresofyawriting.blogspot.com/2012/06/ive-been-tagged.html. It gives you a fab little taste of her latest novel, SEEK.

As to playing Lucky 7, here are the rules:

Go to page 77 in your current manuscript
Go to line 7
Copy the next 7 lines/paragraphs and post them as they’re written (no cheating!)
Pass the meme on to at least 7 other writers.

I’m sending a shout out to my peeps, so hopefully there will be a whole bunch of you who play along by putting a link to your lucky seven in the comments below!

Now, here’s 7 paragraphs from my most recent finished book, HOLDING OUT FOR A HERO. Cassie Grace thinks all her historical-romance dreams have come true when a wealthy British businessman comes to her small Georgia town. But real life isn’t quite as tidy as a book, and it isn’t always easy to recognize a hero …

A little after two, James called to check on any messages. Right. In a word ruled by cell phones and e-mail, nobody leaves messages for anyone anymore. I told him there weren’t any, but Rosemary had asked about him when he didn’t show up this morning.
“Right. Listen, Cass, just as a favor to me, don’t tell her which towns I’m visiting. Of course Rosemary knows we’re looking at several other sites. That’s no secret, by any means. . . Do you mind?”
Ok, I was torn. I mean, I work for Rosemary, and I owe her a certain amount of loyalty. But on the other hand, James had given me the info on his plans under somewhat exceptional circumstances. And if I had any hopes of my relationship with him going anywhere (which of course I did, in a major way), I needed to help him out, right? So I did the kind of hairsplitting I’d seen Rosie and Mr. F. do. Lawyers can always find irrelevant distinctions that justify what they already wanted to do.
I decided I wouldn’t tell Rosemary anything else. And since he hadn’t asked me if had told her anything already, I figured I could cover both sides of my divided loyalties.
Yes, I know that kind of thinking never ends well. But given my stop to see Trina that morning, what was a little more moral relativism? I had decided to put aside the black/white, right/wrong mentality I was used to and look at things in shades of grey for a change.

Janice and Bobby invited me over to a get-together they had Friday night. The Georgia basketball team was involved in some sort of major game that all the guys in town just had to see, so Bobby set up his computer to project onto a screen in the backyard and threw a cookout. Neither basketball nor Bobby’s hamburgers were high on my must-have list, but it beat staying at home and trying to write while I wondered what a certain British Greek god was up to wherever he was.
I got my crispy black burger – e. coli stands no chance when Bobby Harvey is cooking – and settled down on a quilt Janice had spread to the side of the main game-watching area.

And yes, dammit — I used the phrase “shades of grey” in this MS months before any Twilight Fan Fiction using that phrase hit the mainstream!!! (grumble, grumble.)

Tagged #SFWG, Holding Out for a Hero, Monday Muse

Welcome to my little blog, mes amis! It’s such a treat to have you join me on my first attempt at blog-hoppery!

First an introduction. My name is Arabella Stokes, and I write about love. Mostly historical, with lots of lords, ladies, rakes and scoundrels, and maybe even a scallywag or two thrown in. I love and adore the English Georgian/Regency era, and hope that you will join me there this coming Fall when my first published novel, Proof of Love, will be released by Champagne Books.

Proof of Love is about the Duke of Danesleigh, who only believes in things he can weigh, measure and investigate scientifically. But even a rational, logical Duke needs a wife, so he sets out to find a mother for his heirs in a most scientific manner. Just as he runs his stables and his kennels.

When Lady Susan Lanier’s fiancé made her the scandalous laughing-stock of the Haute Ton, she lost all faith in love. Still, she’s a healthy young lady from a fine family, and she fits the Duke’s bridal specifications to a tee.

Together, these two come to learn that love may just be the greatest experiment of them all.

So, you may be asking (probably not, but you might be) – why a scientist, Arabella? People always ask writers where we get our ideas. Most of the time I give them a dumb look and say, “Umm, I dunno.”

But I know exactly where I got the inspiration for the terribly logical Duke of Danesleigh. After I saw Keira Knightly in The Duchess, I read several books about the Devonshire family. One of the odder sprouts I discovered on Georgiana’s family tree was her husband’s cousin, the scientist Henry Cavendish.

Henry was quite brilliant. He was the discoverer of hydrogen, which he named “flammable air,” he was the originator of the “Cavendish Experiment” (the first laboratory exploration of gravity between masses), and was one of the earliest scientists to study electricity. 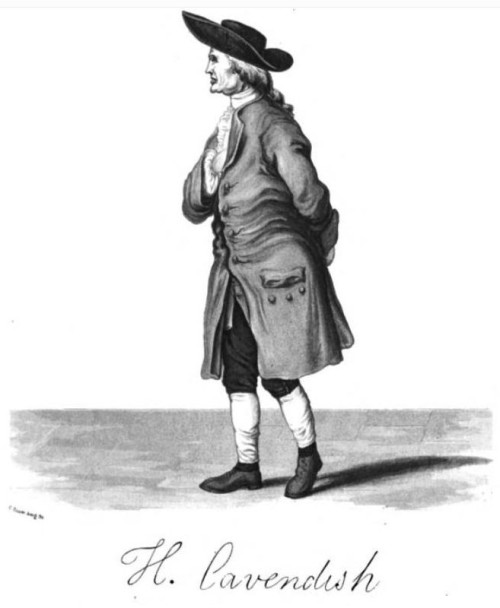 Brilliant, yes. A typical Georgian/Regency rake, not so much. Poor Henry had some issues, to say the least. He was viewed as an eccentric, even by the somewhat generous standards of the Cavendish family. He communicated with female servants only through notes, built a new back staircase in his home so he could avoid contact with his housekeeper, and had no known friends outside of his family. He was so painfully shy that he did not publish accounts of his work, which nearly resulted in his discoveries being credited to other, more vocal colleagues. In fact, modern researchers believe he may have suffered from autism or Asperger’s syndrome.

Now, my scientist/Duke is far from shy and retiring, and definitely not afraid of the ladies. But if you trace him back to his roots, he was indeed inspired by poor Henry.

Have you a favorite odd duck from history to tell us about? A strange yet interesting personality who might make a good story? Leave a name and a brief blurb about him/her in the comments, if you would be so kind. One lucky commenter will get a gift certificate to my e-publisher, Champagne Books! (Which would let you buy my book this Fall, though there are lots of other yummy books in our bookstore!)

I hope you’ll check out my blog again soon. I write about anything that seizes my crazed imagination, from book reviews to the proper care of your muse, from classically erroneous rejection letters to the music I listen to as I write.Every so often the Duchess of Danesleigh even pops in to criticize modern manners.

Yall come back now, ya hear???