Cover Story: The Girl on the Golden Coin

GIRL ON THE GOLDEN COIN: A NOVEL OF FRANCES STUART

Once again, I’m here to introduce you to one of my incredible crit group ladies. Today it’s Marci McGuire Jefferson, who has written an absolutely lovely book about one Frances Stuart, who served as the model for “Britannia” on years and years worth of British coins.

I’m not going to waste your time babbling; I’m just going to turn today’s blog over to Marci and let her tell you all about her book! 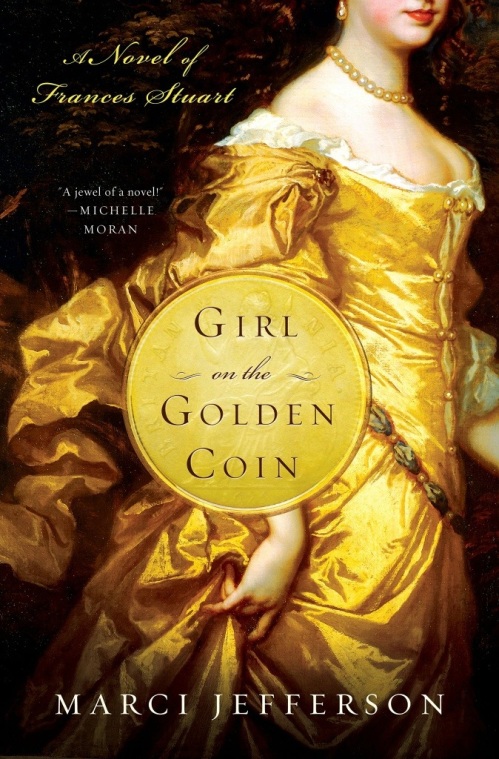 Marci Jefferson’s first novel is about Frances Stuart, who rejected three kings and graced England’s coins for generations as the model for Britannia. The book will release February 11, 2014 from Thomas Dunne Books / St. Martin’s Press. But pre-order this week and comment on Marci’s blog (link below) for a chance to win a pair of sterling-silver pearl-drop earrings like the ones Frances wears on this elegant cover (be prepared to present your receipt).

MORE ABOUT THE BOOK

Impoverished and exiled to the French countryside after the overthrow of the English Crown, Frances Stuart survives merely by her blood-relation to the Stuart Royals. But in 1660, the Restoration of Stuart Monarchy in England returns her family to favor. Frances discards threadbare gowns and springs to gilded Fontainebleau Palace, where she soon catches King Louis XIV’s eye. But Frances is no ordinary court beauty, she has Stuart secrets to keep and people to protect. The king turns vengeful when she rejects his offer to become his Official Mistress. He banishes her to England with orders to seduce King Charles II and stop a war.

Armed in pearls and silk, Frances maneuvers through the political turbulence of Whitehall Palace, but still can’t afford to stir a scandal. Her tactic to inspire King Charles to greatness captivates him. He believes her love can make him an honest man and even chooses Frances to pose as Britannia for England’s coins. Frances survives the Great Fire, the Great Plague, and the debauchery of the Restoration Court, yet loses her heart to the very king she must control. Until she is forced to choose between love or war.

On the eve of England’s Glorious Revolution, James II forces Frances to decide whether to remain loyal to her Stuart heritage or, like England, make her stand for Liberty. Her portrait as Britannia is minted on every copper coin. There she remains for generations, an enduring symbol of Britain’s independent spirit and her own struggle for freedom.

“In her wonderfully evocative debut, Girl on the Golden Coin, Marci Jefferson recreates the fascinating story of Frances Stuart, whose influence over England’s Charles II became the talk of a nation. As vibrant and delightful as the woman it’s based on, Girl on the Golden Coin is a jewel of a novel!”
—Michelle Moran, New York Times bestselling author of The Second Empress and Madame Tussaud

“Beauty is not always a blessing, as young Frances Stuart finds out when her lovely face pits her between the desires and politics of rival kings Louis XIV and Charles II. Frances makes an appealing heroine, by turns wary and passionate, sophisticated and innocent, as she matures from destitute young pawn to the majestic duchess whose figure would grace Britain’s coins for centuries. Her struggles to support her loved ones, uncover her family secrets, and somehow find a life of her own amid the snake-pit courts of the Sun King and the Merry Monarch make for lively, entertaining reading in this lush Restoration novel by debut author Marci Jefferson.”
—Kate Quinn, New York Times bestselling author of Mistress of Rome

“Girl on the Golden Coin is a fantastic novel. I couldn’t put it down. The plot is fast-paced and compelling, with intriguing characters, lush settings and captivating narrative voice. Jefferson’s debut paints an intriguing portrait of Frances Stuart, a novel worthy of the determined, golden spirit of the woman whose face became the model for Britannia herself.”
—Susan Spann, author of Claws of the Cat

“Girl on the Golden Coin is a sexy, exciting tale featuring vivid characters, rich historical detail, scintillating court intrigue, and a complexly rendered heroine in Frances Stuart, Maid of Honor to the Queen of England, who will capture the reader’s heart — as will the man she loves, that rascal King Charles II.”
— Sherry Jones, author, FOUR SISTERS, ALL QUEENS